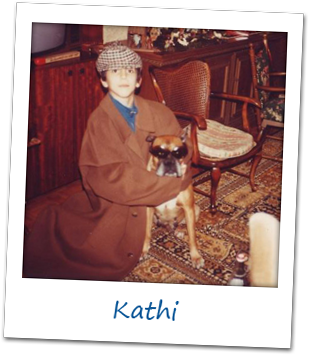 At the age of nine I finally got my first dog I had longed for so long. It was a seven year old boxer bitch that I started to work with at the IBC (International Boxer Club) Langenfeld. The boxer passed away at the age of ten and I got my very first own Puppy "Falk vom Sliepergarten". With this dog I passed the VPG 3 several times. We also participated in tracking tryouts. 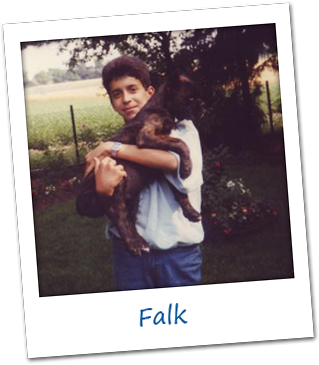 Since I was VERY ambitious and "Falk" had only the potential to compete in smaller local events I talked my parents into buying me a second dog Askia vom roten Falken - a malinois bitch - moved in when I was 15.

The owner of the kennel "vom Roten Falken" was Rainer Mündelein, he lived only about 2 miles from my parents home. Naturally I trained with Rainer and he showed me what dog training was all about. 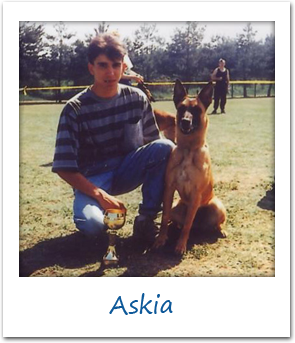 Askia was an absolute fantastic dog. She was very fast in picking up new things and was easy to train, while always being full enthusiasm to work with me. We started - and won - many events. With her I showed the world a new style in obedience. 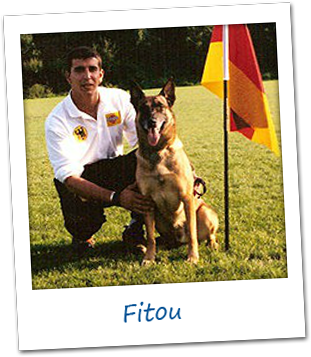 When Askia was 4 1/2 I got a second malinois "Fitou vom roten Falken". This dog was a bit harder to train than "Saskia" since he had the potential and spirit the bitch displayed. Once several experienced hand-lers told me Fitou would never become a great champion I was eager to prove them wrong. Well looking back I guess Fitou and I made our impact. It just took a little more time and effort. I was working both dogs "Fito" and "Saskia" and didn't really plan on getting another dog until Rainer Mündelein told me he had 5 week old puppies at home. 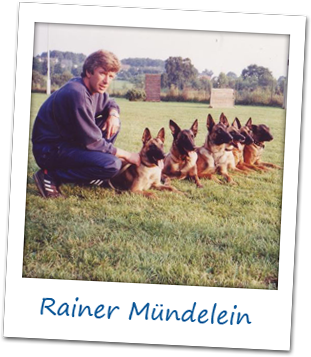 Of course I had to take a look at them! After about 10 minutes of playing with the pups I noticed one male always running to me when I made a certain noise. I don´t know if it was chance or destiny but from this moment on I was in love with this puppy. This puppy that I took home soon after was 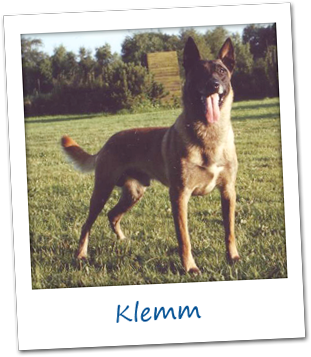 A close friend of mine- Volker Riedel - later describe Klemm as follows:
Even in his lifetime he has become a legend!!

Unfortunately Rainer Mündelein never had the chance to witness any Klemms success, since he passed away when Klemm was only 12 weeks old.

I still train in the same club in leichlingen, where I have been the head trainer for the past nine years. In 2000 we joined the German Malinois Club.

After retireing Klemm at the age of 7 at the top of his game ( winnig 3 World Championship titles) I started training Dago vom schwarzen Pegasus- a german shepard. 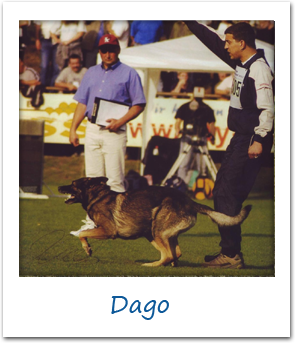 Dago impressed me with his enormous qualities in protection.

Unfortunately the dog was 5 ,5 years old at the time that I started training him. Until that time dago had not been very succesfull competing.

After training for nine months we started competing in trials. In the following years we competed at state and national championships and started twice at the Bundessiegerprüfung. At the Bundessiege in Lübeck Dago took 18 th place ( had he not returned over the wron wall during the retrieve we would have been in thrid place ). Dago became a successfull stud dog . His best known offspring being Javir vom Talka Mara.

After Dago I traiuned yet another German Shepard- Quito vom Salztalblick.

Quito and I also competed at the BUndessioegerprüfung. At the ago of 4 I sold Quito to Japan. At the age of 9 he competed fort he last time at the FCI World Championship.

Along wit Quito I also started training a great young Malinois…Crazy vom Parchimer Land. This dog was supposed tob e my new dog for competing. I was faszinated by her temper and speed. Unfortunately that spped cost crazy her career . During her IPO 1 Crazy injured herself so badly that i had to take her out of IPO sport. 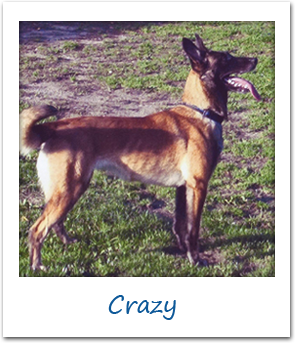 Crazys new owner still competed in obedience with her until she was 10 years old.

Crazy is my most successfull breeding bitches passing along her great attributes to plenty of her pups. Some of her succesfull breedings are : Heavy, Hurricane, Honey, Page, Page , Pepper , Phoebe, Oitu, Punk, Räty, Rosso, Rabatz, Sepp and Soley vom further moor.

Crazy passed away at the age of almost 14 years.

After Crazy I hard a tough time finding a new dog to compete. Either the dogs I bought had health issues or their temper just didnt tur out as well as I had hoped for. 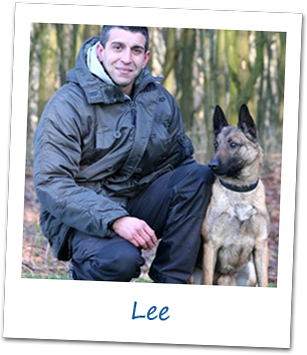 The I got Leeland. Leeland had been living with a team mate fromm y club until he was 13 months old. He was – and still is- a real clown. Always willing to work. Energie just seems to pour out of him making obedience a real pleasure.

I started training and Lee progressed well. Lees biggest problem were his grips. This was a first form e and I thought long and hard about wether or not to continue training a dog for competition that has deficits in protection / grips. Seiing Lees never ending will to work and please i gave it a shot.

With the help of my home team we trained Lee for his first DMC Championat where he took 4th place- qualifying him fort he FMBB.

Lee and I competed at several national and world championships. At the age of 6 I retired Lee after 2 injuries during trials. I learned a lot training with Lee and dont want to miss any second o fit. Today he is a great helper at my Seminars and a great dog for beginners. He ist he first dog my daugther Mia trains with.

One year after Lee Orcan vom further Moor moved in with us. He had been raised by a ladie fromm y club until he was 11 months old. His did a great job of raising him but it just became evidend that orcanwas just too much handle for any owner. 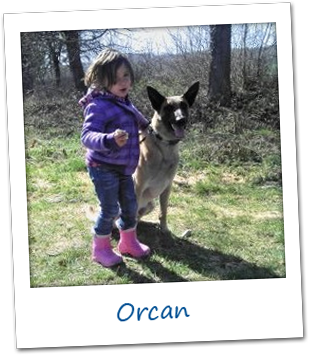 Orcan and Lee were like fire and ice. Ist hard to imagine two malinois being any mor different tha these two. Lee was 55 cm high and 23,6 Kilos Orcan was 68 cm and 40 Kilos Lee the small hectic dog with grip Problems. Orcan a steady Power package like none that I have seen before with incredible performance in protection.

As a puppy few noticed how special this dog was . At the Age of one year it was bluntly obvious to all.

We started training and it was a long and hard road to success. Me and my team more then once asked ourselfs if this journey will be a succesfull one. But together we did it …and once we could send him tot he blind without a leash we knew:“ WE HAVE DONE IT . ist all downhill from here“

I started competing with orcan and he impressed Judges, the odience and last but not least the helpers. His distinctive barking and his brute strenght in protection are unparalleled . His biggest succes was the thrid place at the World championship in Slovenia. 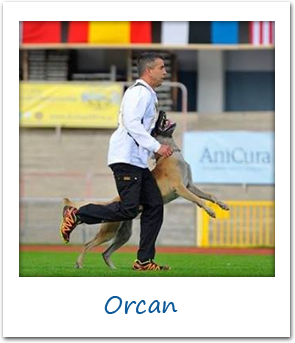 My personal highlight with Orcan however was winning the DMC Championat fort he first time after competing for so many years.

Orcan is one oft he most succesfull stud dogs and – just like Klemm- already a legend.